The Devaluing of Physicians: Why We Are Hamsters On a Wheel

May 31 Posted by Maiysha Clairborne MD in Blog 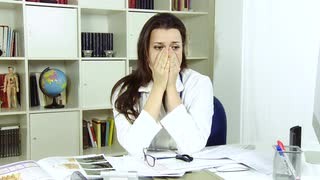 I was talking to a burned physician mom recently and the topic of RVU's came up in our conversation. As she shared with me how her hospital organization was shifting their model to RVU based on productivity, and how this was going to significantly decrease her salary unless she increased her patient load (even though she was already seeing 20-25 patients/day). In fact, she was worried that she would actually have to pay back the company because she didn't feel that in her current state she could do much more than she was already doing.She was working 5 days, staying at work until 6 or longer, taking charts home every day (and often charting on the weekends).She barely had time to spend with her children and husband.When she was around family, she stated wasn't really "there" but instead on the computer trying to catch up from the prior week's charts and inbox.Sadly, this is not the first time I had heard this story. In fact, I cease to be amazed at the number of physicians I'm interacting with who are suffering at the hands of RVU models based completely on productivity.

Revenue Based Units were designed to basically be an "eat what you kill" model.It's basically a volume based model, and in theory could be profitable.There are two problems with this:

a.RVU's are calculated by the large organizations that employ these physicians and often, are fairly convoluted and complicated…so complicated in fact that it is not uncommon for leadership in these organizations not be able explain their own breakdown if asked by the physician themselves.Furthermore, there is really no standard for calculating RVU's which means that the calculations can differ organization to organization even in the same specialty.So, one organization might make a 99213 equal to 2 RVU while another might make it equal to 2.5 or 3RVU's. Additionally, how a physician is compensated in this system is determined by relative skill level, fee schedules, expected revenue, and competitive comparison of physicians in the same specialty.All of this makes RVU's rather arbitrary. Why is this important, though? Because the convoluted nature of RVU calculation makes it easy for the healthcare organization to set their own rules, and if the physician doesn't understand it, and they can't explain it, it leaves the door open for them to alter and change their "calculations" whenever they feel like it and with no regulation.This basically puts the physician's value in the hands of people who often have no idea of what it's like to be on the front lines as a doctor.

b.The second problem is that because productivity based RVU's are a almost completely a volume based calculation, physicians are having to work more to make the same amount or less than they did when there was a mixed model or salary guarantee. This is especially tragic when you have people who have trained an extra 3-5 years to become subspecialists and are making equal or less than their non-subspecialty counterparts.I'm not saying one specialty (or subspecialty) is better than another, however we are not a socialized medical system, and therefore it seems that it would be fair to expect pay to correlate to level of training.

What's interesting is that there is a mental hazing component to this manner of devaluing physicians.With the arbitrary nature of the way hospital organizations calculate RVU's physicians are so nervous about having to pay back their organizations that they are setting their own salaries lower to avoid payback and then hoping for a bonus at the end of the year.What I've seen in the physician (particularly women and physician moms) I've conversed with is that this manner of conditioning over time deeply affects the their self perceived value. After awhile the doctor simply accepts the lowering of his/her salary and becomes resigned and cycnical that it could be any other way.

However with that resignation comes the continued allowing of oneself to be treated like a workhorse. With this shift to productivity based RVU's the physician increasingly experiences the "hamster wheel effect" until they either burnout completely or (if they are emotionally intelligent enough) become aware the life they are living is not sustainable. These doctors usually choose to jump off the hamster wheel before burning out. Yet, while the RVU system is a problem generated by this whole broken system of health, it is our own resignation that has allowed this continued devaluing of our physicians over time to take it's course.

Unfortunately, most physicians are trained that there is only one path as a physician and that is to graduate from medical school, do residency, and get a job as an academic, researcher, or clinician. If the physician is lucky (meaning either they know the right people or they kill themselves working to "prove they are worthy"), they might get into leadership or hospital administration.Most physicians will continue to suffer because they were never taught things like business and entrepreneurship. They were led to believe that doing anything other than landing on the three aforementioned paths is a failure. In fact business and physician entrepreneurship is a fairly new development in our industry.However, there are physicians who are becoming savvy. Those physicians are stepping outside of the mold and creating a new conversation for what it means to be a successful and financially free physician in this era;And when we begin to open our peripheral vision and see that there are multiple paths to freedom and fulfillment without having to be devalued and degraded, we may just have a chance at reclaiming an industry that was once ours.

Your feedback is valuable. Feel free to leave comments on this article with your insights and ideas about what we've written.

Reclaim Your Time, Freedom and Live a Life YOU Design.Watch this free training on how you can create a career you design. https://goo.gl/BXjXyv